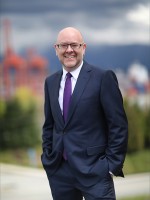 Mr. Mazur has over 25 years experience working on corporate investments, strategic partnerships, financings and M&A. He has held senior positions with some of the world's largest investment banks including ABN Amro, Citigroup, Lehman Brothers and Merrill Lynch.

Currently based in Hong Kong, Mr Mazur has been in Asia since 1996 with additional positions held in London, New York, Dubai and Sydney. He has worked on over 100 principal investment, strategic advisory and financing transactions totalling over $50 billion across more than 20 countries.

Mr. Mazur has appeared in the Wall Street Journal, Asiamoney, FinanceAsia, The Globe and Mail, The Australian and other international publications.

Mr. Mazur holds a M.Sc. in Economics from the London School of Economics and a B.Comm from the University of Toronto.